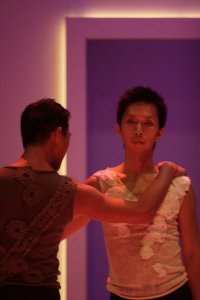 
Allen graduated from the Hong Kong Academy for Performing Arts, and received MFA degree from the Tisch School of the Arts, New York University. He danced with many major dance companies in Hong Kong and the US, and collaborated with numerous renowned choreographers, visual artists, designers, dancers, musicians and actors. Allen founded Muse Motion in 2004 and produced Vibration in Stillness, followed by Twirling Haze (2006), Angels Within (2007) and Space Within Shapes (2008). The work Rhapsody In Dance (2007) was supported by the Leisure and Cultural Services Department, which later commissioned him to create Opening Doors With A New Set of Keys. Fall of A Sudden was a collaboration with award-winning director and actor Tong Wong. Lam produced, choreographed and performed in Moments in the Palm Of Your Hand (2009) and Invincible Truth (2011). He received Hong Kong Dance Award in 2006 for Dance Wide HKNY, an exchange project between Hong Kong and New York